"To Jane Randolph" -- the story behind the painting 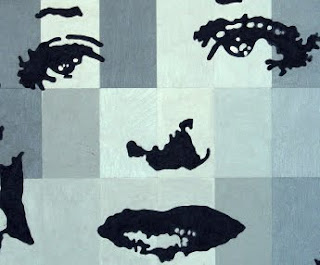 I wanted to take a moment and talk about the first painting on my "paintings for sale" page, the one titled "To Jane Randolph".
Back in 1992, I had the good fortune of attending a month long artists' workshop in Terni, Italy, called La Romita. (I would recommend it highly to any fellow artists out there.) At this workshop, I met Jane and found her to be a fascinating lady the more we had occasion to speak.
Turns out she had been an actress in the forties and had appeared in quite an interesting number of black and white films! (One was "Cat People" and another "Abbott and Costello Meet Frankenstein".) There are indeed, clips of her on youtube... check them out!)
Several years later she was in New York and called me and we met and enjoyed a walk through an Edward Hopper retrospective, and she insisted on treating me to lunch afterward. Classy lady.
She died last year and the painting is a tribute to having met her. -BL
Posted by BL at 11:59 AM

your visual narratives have a real intensity that relect so much of who you are! Jane would be very pleased

Thank you Catherine! I plan on speaking about more of my pieces in the future....I think people would enjoy having another context to view the work from.
-BL

"BL said...
I think people would enjoy having another context to view the work from.
-BL"

Your collages are some of my favorite works. Readers would be interested in the creative process of collage from concept through construction to dispel the commanly held myth that anyone can do it!

Catherine makes a very valid point. I will be talking about the process of creating my collages
and the layers of work and thought that go into each piece. Thank you
for the great suggestion!
-BL

When is the Open Studios for LIC artists? Can you post information?